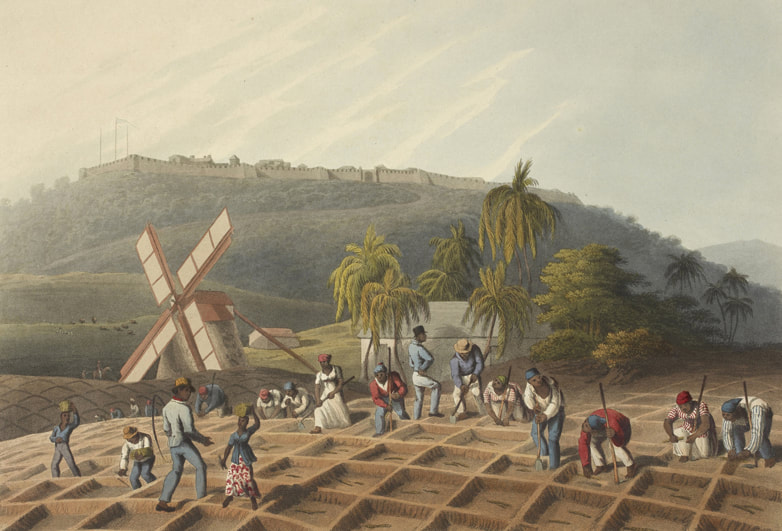 "Ten Views in the Island of Antigua" From drawings made by W. Clark, Thomas Clay, (1823)
The Shared Cultural History of African and Irish people

This project examines the shared cultural heritage of African and Irish people commencing with the era of slavery, when these two cultures worked alongside each other in the plantations. The history of African slavery is well documented, but the story of how the Irish came to be in the Caribbean is not as well known. Many came as indentured servants with the promise of a new life, others were transported against their will with many “Barbadosed” during Cromwell’s conquest of Ireland.

Far from their respective homelands and brought to work in the harsh regimes of the New World, often the only things that these slaves and labourers brought with them were memories of home, their customs and their culture. The triumph of the human spirit ensured that music forms emerged from these harsh experiences; traditions were retained and modified to produce music that spoke of pain, exile and reconstitution – a universal language that moves people of all cultures.

This project examines a number of studies and features interviews with notable academics. Topics covered include how the Irish came to be in the Caribbean and why Montserrat is known as the “Other Emerald Isle”; how the Jamaican Maroons retained African traditions; how the banjo became an integral part of folk music in the Caribbean, Ireland and the remote Appalachian Mountains; interviews with people from Slough to look at the migration experience from the Caribbean and Ireland in the 1960s.
Aims & Objectives of this Project