The Shared Cultural History of African and Irish People 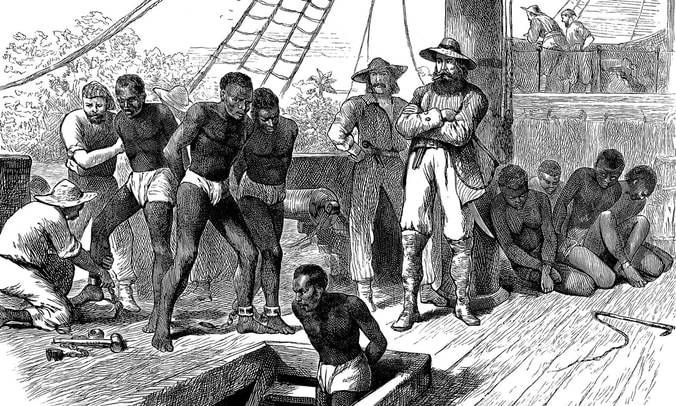 Slavers bringing captives on board a slave ship on Africa’s west coast. Date: 19th century.
African Slaves
The Atlantic slave trade involved the transportation by slave traders of enslaved African people, mainly to the Americas. The New World economies were dependent on the supply of labour for the production of commodity crops, making goods and clothing to sell in Europe. This was crucial to those western European powers vying with each other to create overseas empires from the seventeenth century.

Native peoples were at first utilized as slave labour by Europeans until a large number died from overwork and Old World diseases. Alternative sources of labour, such as indentured servitude, failed to provide a sufficient workforce.

A vast amount of labour was needed to create and sustain plantations that grew crops that could not be grown in Europe. They required intensive labour to grow, harvest, and process prized tropical crops.

Irish Indentured Servants
Irish indentured servants provided labour for the British Empire, in the Caribbean. Indentures agreed to provide up to seven years of labour in return for passage to the New World and food, housing, and shelter during their indenture.

During the initial stages of sugar production, white servants sometimes found themselves working side-by-side with African slaves. But later white servants were used only in skilled or supervisory roles. In later years workers from China and India arrived to the Americas as indentured labourers.

Differences between conditions for Slaves and Indentured Labourers
Political prisoners, vagrants, or those defined as "undesirable" were transported by the English state. During the Cromwellian conquest and settlement of Ireland (1649-1653) thousands of Irish people were sent to the Caribbean or "Barbadosed", against their will.

Servants had little control over their destination, as their contracts were sold to local planters on arrival. Ships were often overcrowded, and the mortality rate on voyages could be high.

Africans were chattel slaves, which meant the slave was treated as the property of the owner. As such, the owner was free to sell, trade, or treat the slave as he would other pieces of property and the children of slaves were often retained as the property of the master. In documents their monetary value is always referenced and they are often unnamed.  In legal terms they were treated as livestock.

Indentured servants were not sold as chattel. At the end of their period of servitude their masters were legally required to grant them "freedom dues" in the form of either land or capital. They were afforded the same rights as European servants and their period of indenture was not perpetual or hereditary. 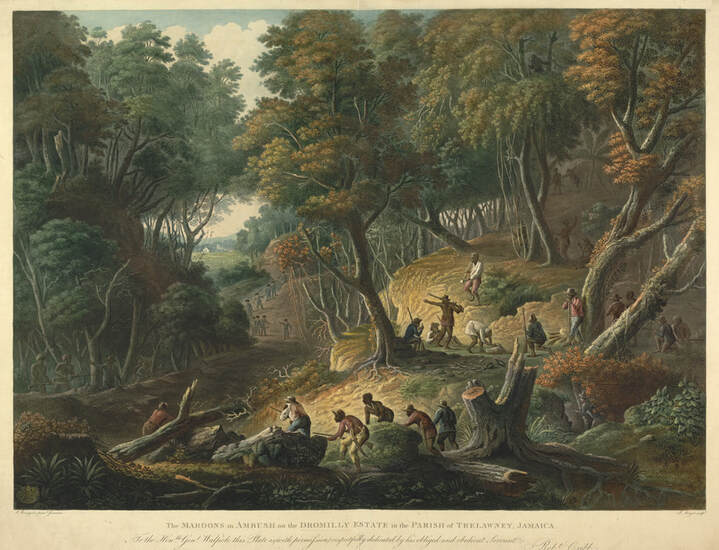 The Maroons In Ambush On The Dromilly Estate In The Parish Of Trelawney, Jamaica. An aquatint (from a painting by F. J. Bourgoin) depicting British troops caught in an ambush by a group of Maroons in 1795.
The Jamaican Maroons
Maroon communities existed on many of the Caribbean islands, they were made up of former slaves, free black people and indigenous people.  In Jamaica the Maroons formed after the Spanish lost control of the island to the British in 1655 – 1660. The name Maroon is of Spanish and French and means “hunters of wild animals” and later simply “wildness and fierceness”.

The Jamaican Maroons were made up of runaway slaves, mainly former Ashanti prisoners-of-war. After the First Maroon War (1731 – 1739) the British concluded a peace treaty with the Leeward Maroons led by Cudjoe and with Quao of the Windward Maroons. The most famous leader of the latter community was Queen Nanny (officially recognised as a National Hero of Jamaica).

The Maroons resisted any attempts to be re-enslaved and were able to maintain cultural practices in the turbulent environment of colonial Jamaica. Today semi-autonomous communities exist in some of the most isolated parts of Jamaica: Accompong Town, Moore Town, Charles Town and Scott’s Town. 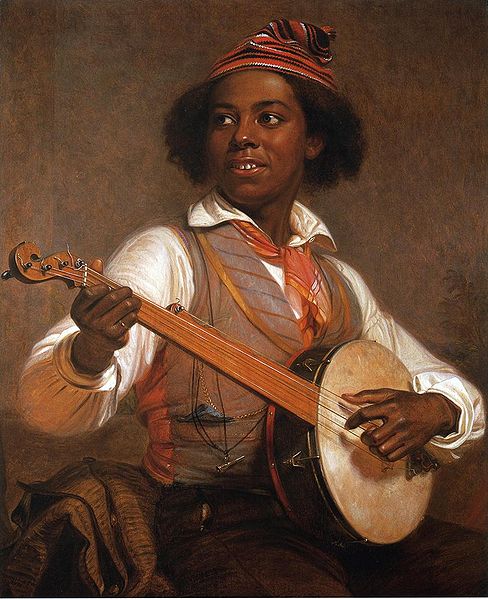 William Sidney Mount - The Banjo Player. Date: 1856.
The Banjo
The modern banjo evolved from lute-style African instruments, a stringed instrument with an animal skin drum as a resonator. Late eighteenth century writers refered to early versions of the instrument as the "bonjaw", "banjer" and "banjar".

The four string banjo is the main instrument in Jamaican Mento, a "country music", folksy style. The banjo was used a lead instrument or to strum a rhythm, a fashion that may have influenced the later reggae musicians.

The instrument was introduced to Ireland in the nineteenth century. By the 1960s the banjo had become an integral part of Traditional Irish Music thanks to Barney McKenna of band The Dubliners. McKenna introduced the GDAE tuning so that it was easier to accompany flautists, fiddlers and pipers.

Appalachian Music
The original Appalachian communities were made up of former indentured servants who populated the mountains in the 1780s as they could not afford to buy land in the region. Traditional Appalachian music has its roots in Anglo-Celtic folk ballads and instrumental dance tunes. The call and response tradition was influenced by African slaves. In the 1920s the music incorporated what was known as “race music” with many songs alluding to the struggles faced by the recently emancipated black population. The banjo also became a key feature of Appalachain music from the late eighteenth century. 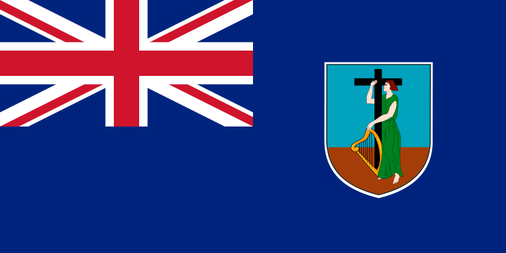 The flag of Monsterrat with Erin, female personification of Ireland, playing the golden harp.
Montserrat
Montserrat is known as the "Emerald Isle" of the Caribbean due to the Irish influence on its history and culture. Irish Catholic refugees from Virginia, USA came there in the seventeenth century. In 1649 Oliver Cromwell sent Irish political prisoners to the island which increased its population. The St Patrick's Day celebrations mark a week-long festival with homage to Irish and African heritage.

Barbados
Indentured servants began arriving on Barbados in the 1620s. After the siege of Drogheda in 1649 Cromwell said of the defeated Irish: "When they submitted, their officers were knocked on the head, and every tenth man of the soldiers killed, and the rest shipped for the Barbadoes". Musical forms that come from the island include Tuk bands, Landship and Art-Music. 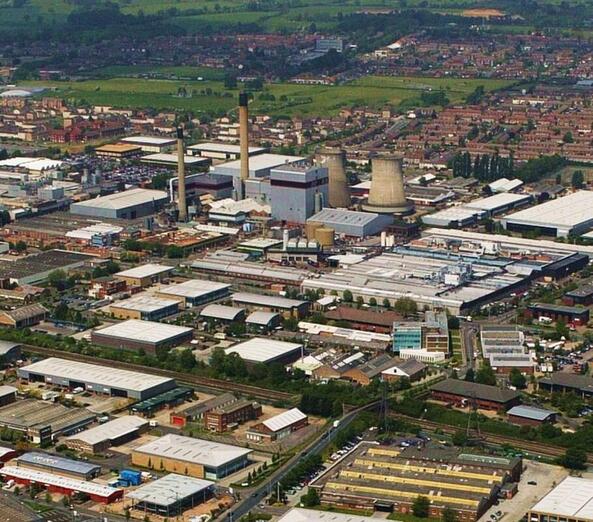 An aerial view photograph taken over the Slough Trading Estate in Slough - By Sloughmani - Own work, CC BY 3.0, https://commons.wikimedia.org/w/index.php?curid=6844929
Caribbean and Irish migration to England
Following the Second World War Britain was short of labour and a generation of Caribbean and Irish answered the call for help. Labour was needed across all sectors, from raw material production to reconstruction, the service sectors, NHS and the public transport network. Those who left the Caribbean and Ireland did so for a variety of reasons: lack of work opportunities at home, to escape societal oppression and poverty. The Slough Trading Estate was one of the largest in Europe, many worked there and transformed the character of the town as they brought their culture, traditions and music with them.
Supported by The National Lottery Heritage Fund